"What new technology will replace the iPhone?"

If you're a tech geek, you've probably thought about this at least once.

The iPhone, which was not available 15 years ago but is now in everyone's hands, is a revolutionary device that opened a whole new market of mobile apps and dramatically changed the way people interact with the world.

Neurosity, a New York-based startup, has a vision to further unlock the potential of our experience by using BCI technology, which connects the brain and computer.

These days, Neurosity is gaining momentum with the March launch of CROWN, an EEG device with a CPU powerful as a MacBook Air.

For this interview, we had the opportunity to talk with Alex Castillo, the founder of Neurosity, about the appeal of CROWN and his vision to change our lives with BCI.

Neurosity was co-founded in 2018 by AJ Keller, the CEO, and Alex Castillo, the CTO, and is currently in its seed startup phase.

The team has excellent teamwork across a wide range of hardware and software. AJ, who is responsible for all of the hardware side, studied computer engineering in college and then worked at Boeing to automate construction of planes and robots. AJ has a professional background in hardware, while Castillo has worked as a software engineer for 15 years at Netflix, GrubHub, and other companies. Based on his vast knowledge and experience, he is responsible for all of the software development at Neurosity. Their team also has neuroscientists from UC Berkeley, as well as people with divserse skills necessary to run the interdisciplinary business.

Although Castillo has been working in the software industry for a long time, he was introduced to the concept of Neurotech only about five years ago, when a family member or friend had a mental illness.

"I've been really studying and am interested in how people interact with these applications or just with computers in general. At the same time, I did grow with family and friends suffering from mental illnesses like epilepsy, and it made me very curious to learn about the brain because of the impact of cost in my life and my family's life. So when I had the chance to try out available technology for brain-computer interfaces (BCIs), I knew I just had to get involved."

CROWN, a non-invasive device announced in March, uses eight sensors to detect brain waves, and through the dedicated "Neurosity Shift app," it can measure your level of concentration and relaxation.

Also, by linking the app to your Spotify account, you can discover songs that increase your productivity based on your brain activity, and mute your notifications based on your level of concentration. These features will lead you to a "flow state" where you are completely immersed in the moment; in other words, it gets you into the "zone."

Castillo explained to me that the strengths of CROWN are the accuracy of its sensor locations, which are calculated backward from the intended use, and its design, which maintains simplicity.

"EEG has been researched for many decades, and you have to wonder why people are not wearing it. So what we've done that has never been done before is that we have made the device smart. ... We just didn't build a device and then figure out the applications, we started thinking, 'How do we want to offer value to people's lives?' 'How do we want people to use a device?' So we had basically our product or the ideas that we wanted to implement, and we started designing from the ground up based on the sensors on the head. We used a mannequin for the different sensor locations that we wanted to tackle. And then we designed all around that."

Like CROWN, there are many BCIs in the world that cover the four brain regions of the frontal, occipital, parietal, and temporal lobes, but few of them have a simple design that can be worn in daily life.

Castillo also said that another advantage is that it has the processing power as powerful as a MacBook Air.

"When the first iPhone came out, it opened all new possibilities. And certainly, you were not just using a phone, but you were using an operating system that had many different applications. We have done that with the CROWN. So the CROWN also has CPUs, RAM, and enough computing power to run machine learning and very complex processing algorithms. So we are able to also run applications on the device."

Journey through the device interface design 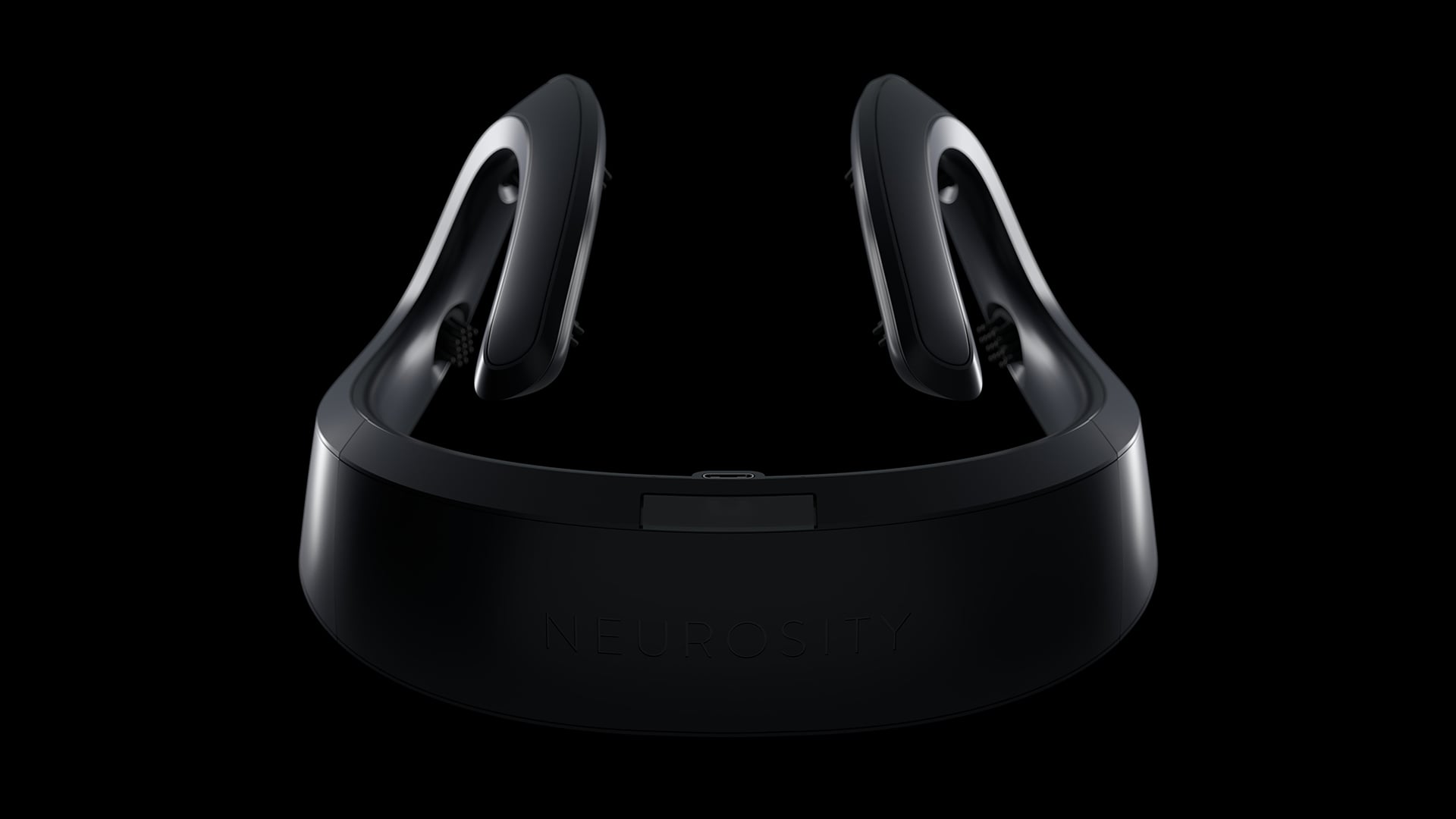 CROWN has great functionality and is simple enough to be used by anyone in their daily lives, but a lot of thought and effort went into designing its interface.

"In the journey for interfaces, initially, I always thought the form factor could be a dealbreaker for most people. But if we start to look back at how we came with headphones which were invented many decades ago, your headphones were very heavy and much bigger. However, they allowed humans to have the ability that no other device gave them. What happened was that across time you can see the headphones getting smaller, lighter. ... So does it really matter much about the size, look, and feel? I think to an extent, but I think if we give them something that they can basically put on, and it gives them some kind of ability or advantage over our superpower, people will definitely be focused on what you can do for them. ... So we're packaging technology that is as powerful as a MacBook Air all in a slim form factor. And that's just like our start design."

When it comes to designing future interfaces, Castillo explained to me that the priority will be to focus on the needs of the user and then explore ways to make the device smaller.

"Not too far from now, we're going to have devices that you can barely see that are going to be super tiny. So we're more focused on how we can give value to people today that they cannot get through other means. And then we are going to continue progressing and learn design and manufacturing processes to get that technology as small as possible."

In addition to the EEG device CROWN and its dedicated application, Neurosity also provides an SDK for developers to create their own applications integrated with CROWN.

So how do we find a killer application?

Many people have difficulty switching their minds from one thing to another.

Castillo said that the Neurosity Shift app, which induces such people into a flow state, is tackling just the first of several challenges that society is facing.

The key to the development of BCIs is how to bring research into the real world.

There is a lot of research being done in the field of neurotech around the world, and many startups in the field, including Neurosity, have emerged since.

How will the BCI that connects the brain and computer develop in the future?

Castillo replied that it is extremely important not only to have good research but also to practically apply it into our lives.

"I'm super excited about some of the new research like the research that has shown how you're able to predict epilepsy seizures up to one hour before they happen. But how can we put that to the real world?

Because we trid to do that with all the devices that were in the market before we started working on hardware. And they were not consumer-friendly. They didn't even look friendly enough for someone to want to put down their hat. So I think creating the brain-computer interface that is not meant or designed to work in a lab was the first step and we accomplished that."

This time, I had the opportunity to interview Castillo from Neurosity, a company that offers CROWN which is an EEG device with excellent design and processing power.

The day may soon come when EEG devices like CROWN, which combine wearability and functionality as a stand-alone device, will be incorporated into our daily lives as "mobile devices" that we can easily use every day.